What is the critical path of a project?

In project management terms, the critical path is the sequence of events or tasks that must be completed on the way to full completion of the project. By mapping out this path, a project manager is better able to keep a project on time and within budget. It’s a little like mapping out a route for a road trip: stops are identified, with timings calculated to keep the journey on track. Reaching one of these road stops late will impact the whole trip.

Identification of the critical path

Determining the critical path is key to determining project schedule – if the route isn’t known before setting out, then how can arrival time be accurately estimated? By laying out all the tasks which need to be completed, and then assigning times to complete each task and scheduling within the project as a whole, the project manager will be able to accurately determine schedule.

Elements along the critical path

Each task undertaken during the project schedule is given four distinct parameters:

Many tasks will also have what is known as slack time. When conducting critical path analysis, this slack time is simply the absolute maximum delay in a task possible before the subsequent task is delayed. Understanding this relationship enables the project manager to identify the project’s critical tasks – those tasks that cannot be delayed in their LF without delaying the project. Critical tasks are those with the same earliest and latest finish times.

Each delayed task will impact start times of ensuing tasks, thereby causing tasks which had previously been considered as non-critical to become critical (so the list of critical tasks is a fluid concept).

Critical path analysis identifies the order in which each task must be undertaken, as well as its importance to the project. This analysis is normally depicted in a flow diagram on a time line. When such a diagram is constructed, real task impact is more easily identified: small tasks which may have otherwise appeared insignificant can suddenly take on a far more crucial meaning.

Project managers use a number of tools when undertaking critical path analysis. One of the most often used is PERT (program, evaluation, review) which calculates best case and worst case scenarios as well as identifying interdependent tasks and activities along the critical path.

By comparison with critical path analysis, project performance can be accurately measured and reported against planned schedule and expectations. It enables early identification of slippage in the time budget of a project, and is also used to help control costs by early warning of project delays. 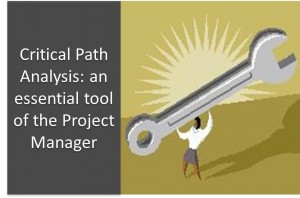